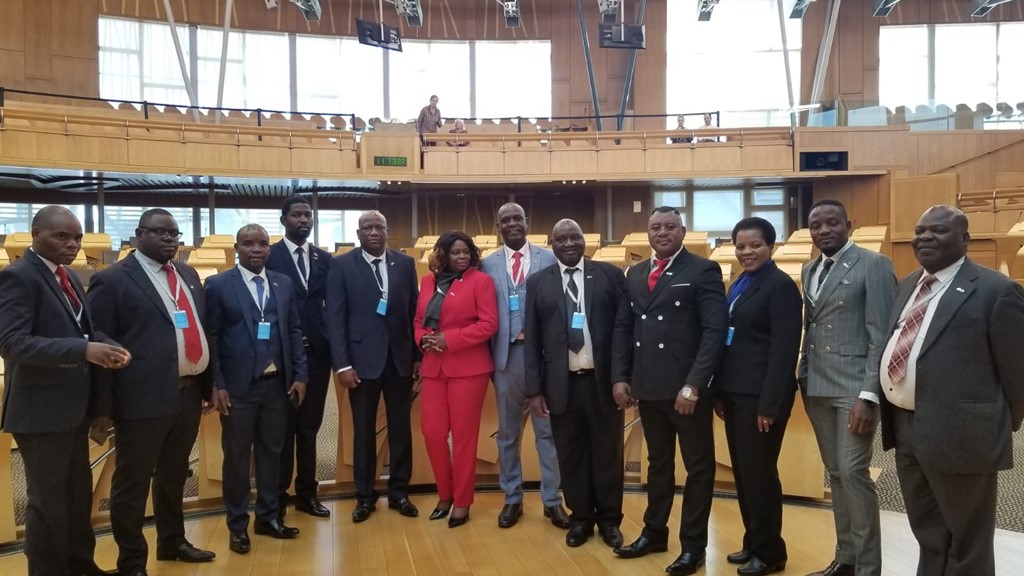 From 3 - 5 March 2020, CPA UK organised a programme on Strengthening Committee Scrutiny in partnership with the Scottish Parliament for a project funded by the Commonwealth Partnership for Democracy (CP4D).

Building on the Post-Election Seminar delivered in August 2019, the programme focused on the strengthening of committees and enhancing legislative scrutiny through developing the technical skills of committee members and officials.

The programme consisted of a day of meetings and discussions with MPs and clerks as well as observing committee and chamber proceedings in the Houses of Parliament; followed by a day at the CP4D Inclusive Politics Conference; and lastly observing First Minister’s Questions in the Scottish Parliament along with meetings with several officials.

To form the basis of discussions in the programme, Baroness Barker met the delegation to highlight the tools for parliamentary scrutiny in the UK. Baroness Barker explained the key factors that affect the process of scrutiny, such as access to information, rules governing the access to information and factors related to time, such as time needed to obtain information and time taken to utilise information. She followed on to highlight the information systems in the UK Parliament and gave a breakdown of the scrutiny processes in the House of Commons and Lords as well as systems of scrutiny that span both Houses, including the committee system.

As several of the delegates were Members of the Public Accounts Committee in Malawi, CPA UK arranged a meeting with experienced UK PAC Members Nigel Mills MP and Chris Evans MP to explore differences and discuss good practice. Mr Mills and Mr Evans explained how the PAC differed from other UK committees in that it did not scrutinise policy, but rather how well government implements policy and if value for money was achieved. Delegates noted that the challenges for the PAC in Malawi were of a different nature to those faced in the UK as the Malawi PAC focuses largely on investigating institutional corruption.

Mr Mills and Mr Evans gave insights into how the UK committee functioned effectively in their time, providing examples of successes and challenges faced and how they were overcome.  They described how the committee chose its topics and inquiries, how information was gathered, and the relationship between committee members and staff. Mr Evans stressed the importance of good programme management for achieving any committee’s aims.

Delegates had in-depth discussions on how to conduct effective inquiries with Neil Parish MP, Chair of the Environment, Food and Rural Affairs Committee and Ian Bradshaw, the Clerk of the Committee. Given that several members sat in committees of a similar remit, many comparisons were drawn, and good practice identified. Delegates were interested in how Mr Parish, a government member, balanced party politics with his duties as Chair. Mr Parish explained that as Chair of the Committee he focused on scrutinising government to ensure that it was effective.

Delegates were able to build on the day’s discussion by conferring with Rt. Hon Philip Dunne MP, Chair of the Environment Audit Committee and Lloyd Owen, Clerk of the Committee, on reports and follow-up. Delegates considered follow up and implementation a major challenge. Mr Dunne recognised that this was a challenge for committees everywhere and in part intrinsic to the process itself, however he highlighted measures committees can take that would aid implementation and follow-up like leveraging the media. In one example, the Environmental Audit Committee report on micro-beads, coupled with media pressure, helped the committee successfully call for a ban on products containing the plastic micro-beads. Mr Owen further noted that, at times, sending Ministers recommendations before releasing these to the press proves effective in itself.

The delegates visited the Scottish Parliament for the last day of the programme. There are strong historic ties between Malawi and Scotland, but more importantly for the purpose of the programme, both parliaments are unicameral. The visit thus enabled delegates to observe how a unicameral parliament operates in the UK and how committee work differed, offering a relevant comparison to their own legislature. It also allowed delegates to observe and distinguish more generally the differences in practice and convention between Westminster and the Scottish Parliament. CPA UK looks forward to further engagement with the Malawi Parliament.

Information on CPA UK’s past engagement with Malawi is available here.