Alex Norris MP: Ridding our world of modern slavery by 2030 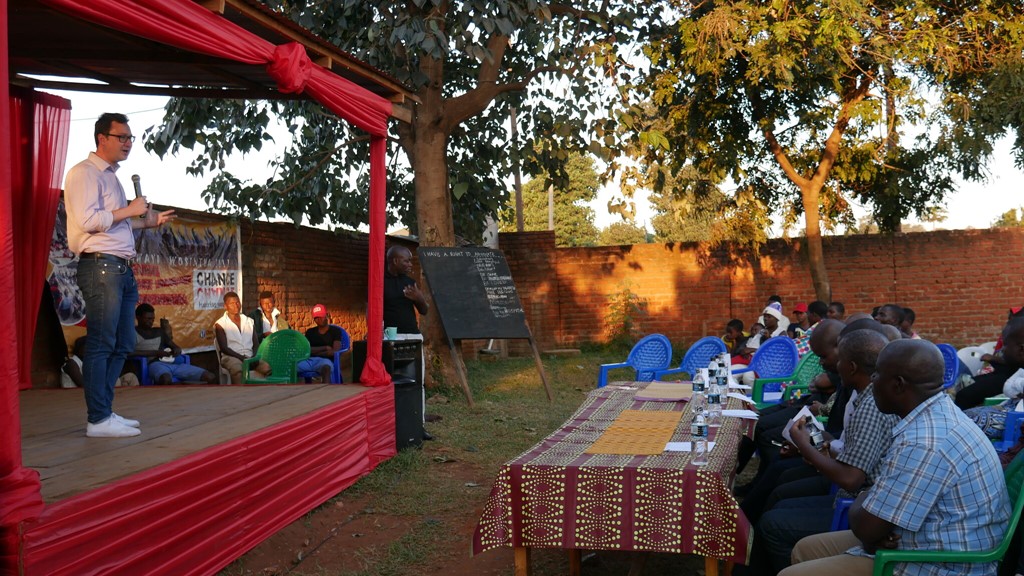 Alex Norris MP is Labour (Co-op) Member for Nottingham North and is Shadow Minister for Health and Social Care. He has also been an active participant in CPA UK' Modern Slavery Project. He writes below about how he became involved in the fight against modern forms of exploitation, his work with CPA UK and the recent launch of the e-Handbook on Legislating against Modern Slavery, Human Trafficking & Forced Labour, which he contributed to. The article appeared in the latest edition of The Parliamentarian which can be viewed here.

When most people think of the word “slavery”, images of people shackled, abused, and imprisoned all-too-often come to mind. It’s thought of as a despicable practice from a by-gone time, confined to a shameful period in Western civilisation. Yet globally, there are more people enslaved today than at any time in our history. Researchers believe that around 13 million people were captured and traded between the fifteenth and nineteenth centuries. Staggeringly, as of last year, experts estimate that more than three times this amount are currently living as modern day slaves around the world. Of this number, over two thirds are women and around a quarter are thought to be children. Now standing at over 40 million people, the numbers are staggering and hard to fathom. To put this overall figure in context, a larger number of people than the entire population of Canada are currently ensnared in we now term “modern slavery”.

These people are forced to work against their will, have their liberty stolen, and are treated as a commodity by their exploiters. While the world may have moved away from the transatlantic slave ships of centuries gone by, the demoralising and dehumanising practices we see – or don’t see – inflicted upon over 40 million of our fellow human beings is a perennial mark of shame on the international community.

Both in my own Parliamentary constituency of Nottingham North, and across the UK more widely, the majority of people are unable to properly explain what modern slavery is, or identify the many issues associated with it. The national numbers are stark: one in five people in the UK don’t know what it is, while two thirds don’t know how to spot the tell-tale signs of this exploitation. Perhaps most terrifyingly, one in ten people believe they may have come across a victim of this heinous crime, yet half of these wouldn’t know what action to take if they did.

We all have a role to play in ridding our communities, our countries and the world at large of this scourge. We need to educate, inform, and enable people to take a firm stand against modern slavery. And we need people and countries to commit to taking a lead on this.

This is an issue I’ve been committed to leading on in the UK for several years now. Prior to being elected as a Member of Parliament in 2017, my work in the Trade Union movement and with the Co-operative Party led me to campaign to end this practice – and to encourage others to do likewise. What has become increasingly clear to me over many years is that it demands a truly coordinated response, at a local, national, and global level. The need for a decisive, joined-up approach has never been more clear.

Since I became an MP, my work with the Commonwealth Parliamentary Association UK (CPA UK) has enabled me to help help keep this crucial issue on our national political agenda. In 2018, I was privileged to travel to Malawi with the CPA UK to meet with Parliamentarians and Malawian law enforcement agencies to share our experiences of modern slavery and to discuss the best ways through which we can stop it from happening in the future. This wasn’t about mandating a “one size fits all” approach to combatting modern slavery; it was geared towards using expertise from both our countries to find a way forward. My time in Malawi underscored to me that although many countries have different cultures and ways of living, many of the issues relating to modern slavery and human trafficking were highly comparable. Exploitation, it would seem, neither knows nor respects borders.

It’s through important work like this that we can begin to help each other curb the damaging trends we’re seeing with modern slavery – and redouble our efforts to stamp it out completely. Delegations such as the one I joined have fed directly into the CPA UK’s new e-Handbook: Legislating against Modern Slavery, Human Trafficking & Forced Labour. This is a new brilliant tool which provides Parliamentarians and Parliamentary officials with a comprehensive guide on legislating effectively against modern slavery-related crimes.

This is the second volume of the CPA UK’s handbook to be published, following the first edition in 2018, which I know has become a hugely valuable resource for Parliamentarians across the Commonwealth. Modern slavery-related crimes are constantly evolving which makes it all the more vital for our domestic and international legislation to get ahead – and stay ahead – of the curve. This latest volume takes into account the very latest emerging trends in addressing modern slavery, human trafficking, and forced labour. I would highly recommend that Parliamentarians across the Commonwealth use this to help strengthen their existing laws and create new legislation so that we can start to reduce the devastating number of victims these crimes have around the world. The last volume of the e-Handbook was described by the UN’s Special Rapporteur on Contemporary Forms of Slavery as “the most comprehensive, insightful, and practical guide that exists in its field”. So don’t just take my word for it – this resource is a must-read for every nation across the Commonwealth.

As you will read, this second volume covers themes such as best practice for Parliamentary committees and evidence hearings, the importance of raising awareness in Parliament and at a constituency-level, and the role of the media in combatting these heinous crimes. 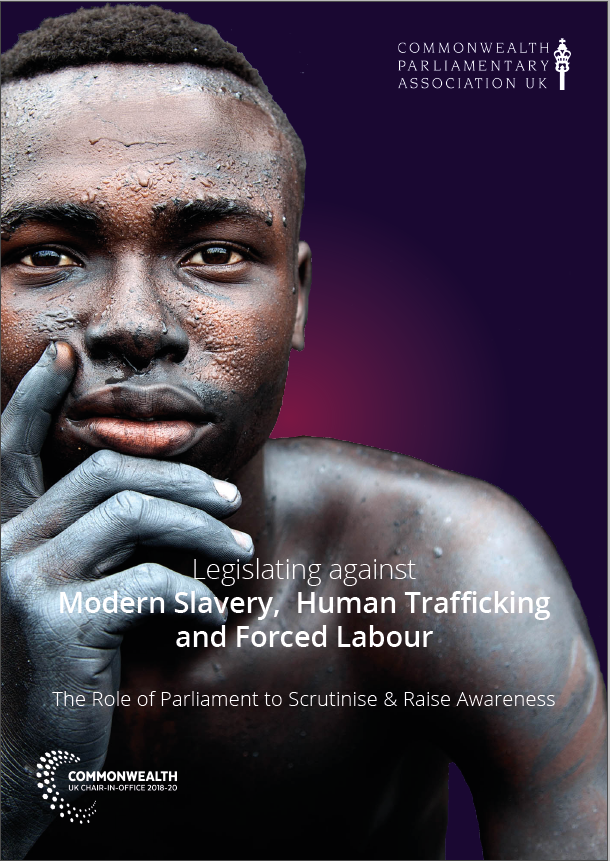 I’m really pleased to have been able to use my experiences and work in this field to contribute to this crucial second volume. Within the e-Handbook, I explain both what we can all do at a local level to rid these crimes from our communities, and also how accountability for these offences can be strengthened at a national level. In particular, the UK’s Modern Slavery Act (2015) is a piece of legislation well worth celebrating. It puts key protections for individuals into law, obligates businesses to be much more transparent about these issues, and gives law enforcement authorities greater powers to catch and punish perpetrators. Of course, as I’ve said, every individual country and local community will have its unique challenges. But legislation like this can be used as a basis through which countries can send a strong message to those who continue to exploit our fellow human beings. It puts them on notice that modern slavery and human trafficking is completely unacceptable in a modern society and that the state can, and will, put a stop to it.

Alongside this, there is a wealth of information out there which can help Parliamentarians share initiatives about how we can start to reduce the number of victims of these crimes. The Interactive Map for Business of Anti-Human Trafficking Organisations, which was created in collaboration with an extensive set of global organisations, maps the initiatives and organisations engaging with the private sector to combat human trafficking, forced labour, child labour, and modern slavery. Since it was first published, this has proven itself to be an invaluable tool in terms of our international response to these crimes. Organisations from around the world are able to share their initiatives and practices on the map which can then be used by legislators from other nations to help them curb similar issues in their home country. I would encourage all Parliamentarians to regularly take a look at this map and to submit any initiatives which you think others may find useful: modernslaverymap.org.

Modern slavery is one of those pernicious issues which no single nation has a silver bullet solution to. Ridding our world of this scourge is going to require every country to take action to strengthen our collective resolve to changing the status-quo. The scale of the challenge ahead of us is far from insignificant but by continuing to work collaboratively through brilliant organisations like the CPA, we can – and we will – finally turn the tide on this disease which shames us all.

Modern slavery is a disease – pure and simple. It is far more widespread than most people would ever countenance and its appalling ability to blight lives across our world means we must all act. We must prevent these crimes from being hidden by a deadly combination of fear, shame, and circumstance. Despite the scale of the challenge, I remain confident that by working together, we can stamp it out in totality by 2030. In just ten years’ time, let’s all make sure we can look back and say that we played our part in bringing about a better, more just world for everyone.