In June 2021 CPA UK hosted a briefing for UK Parliamentarians on the situation in St Vincent and the Grenadines, following the eruption of the La Soufrière volcano. UK Members received updates from the British High Commission in Barbados and the Eastern Caribbean, and the Caribbean Disaster and Emergency Management Agency. The briefing covered the current situation on the ground, the ongoing relief effort and the UK’s support to the islands.

This article provides information on the current situation in St Vincent and the Grenadines and provides a brief background to the historical links between the UK and the islands.

St Vincent and the Grenadines

Known to its earliest inhabitants as Hairoun, St Vincent and the Grenadines is located in the Eastern Caribbean. A multi-island state, it is made up of the main island of St Vincent and 32 islands and cays which make up the Grenadines, including Mustique, Bequia and Palm Island.

With its 111,000 population, the islands are largely known for their clear waters, coral reefs, beaches and tropical climate.[1] The islands are also home to varying species of flora and fauna, including 225 species of fish and rare species of plants, conserved in one of the oldest botanical gardens in the Western Hemisphere.

A largely agricultural country, St Vincent is one of the worlds few producers of arrowroot, a starch produced from specific plants, and bananas are the islands leading exports. 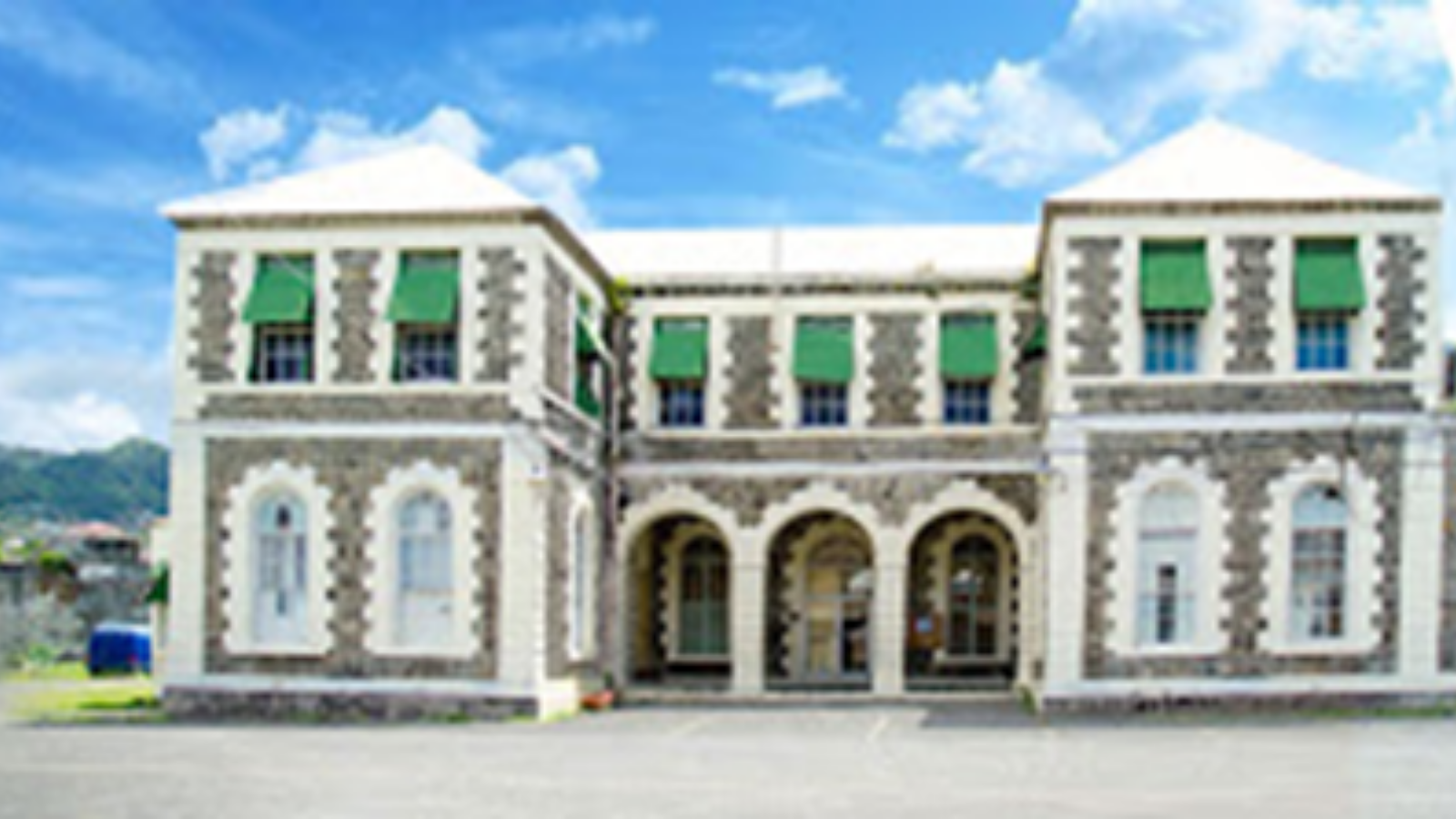 House of Assembly of St Vincent and the Grenadines Source: http://www.assembly.gov.vc/assembly/ 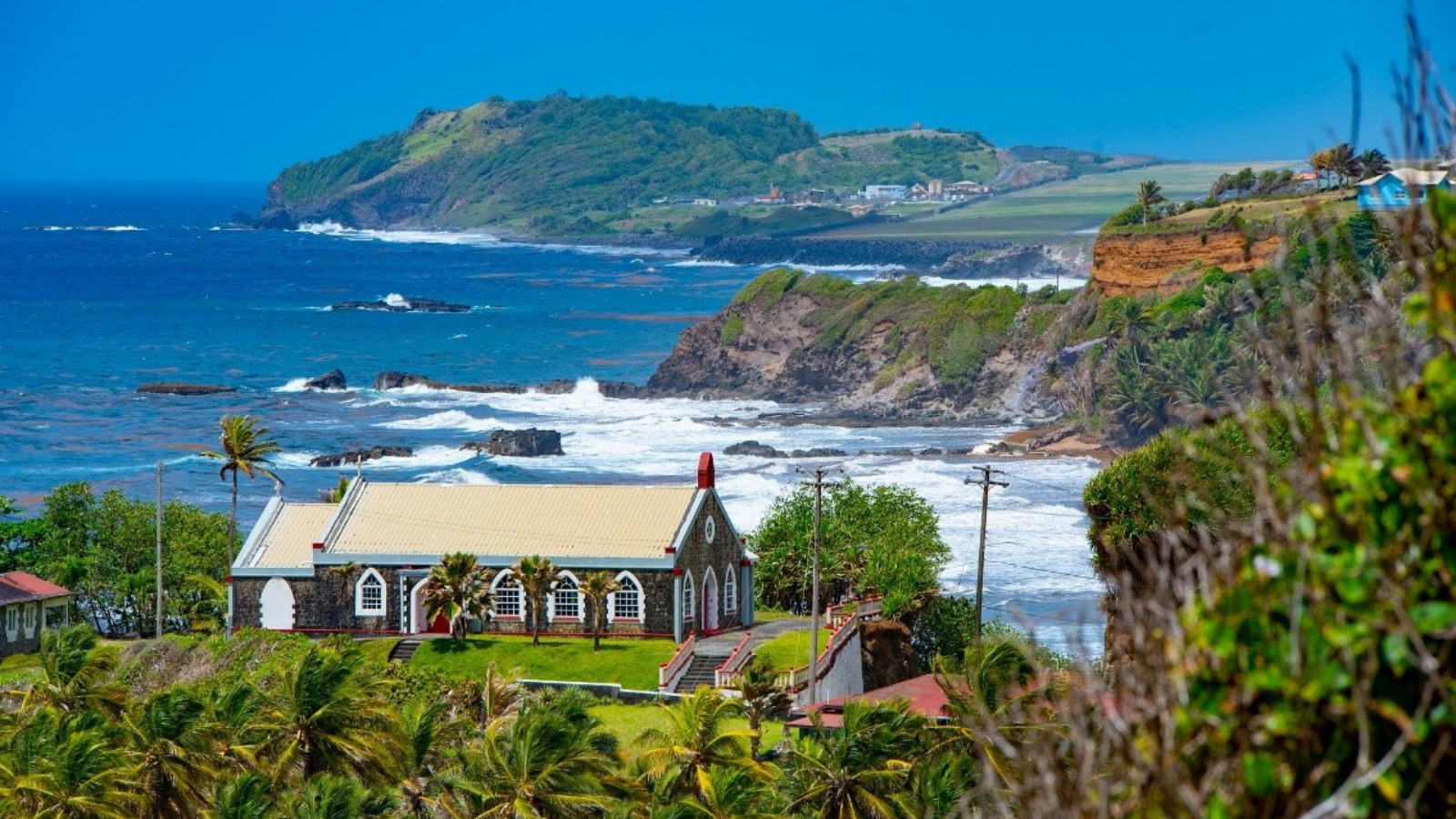 St Vincent and the Grenadines

Britain and the Islands

Similarly to its neighbours, St Vincent and the Grenadines has a long history with the UK dating back to the mid-1700’s. Following resistance by the indigenous Carib peoples of the islands, the British, French and Dutch failed on a number of occasions to settle in St Vincent. The main island eventually came under British rule, although it was temporarily taken back by the French in 1779 before being restored to Britain through the Treaty of Versailles in 1783, with some parts of the Grenadine’s remaining under French rule. The Caribs continued their opposition to British rule through a number of subsequent wars, in 1772 to 1773 and again in 1795 to 1796 but were overcome by the British who then took full control of the island.[2]

Whilst under colonial rule, St Vincent became a plantation economy, with many of those enslaved on the islands made to produce sugar, cotton, coffee and cocoa. Following the rise of independence movements, Britain as the colonial power granted St Vincent the status of associated statehood, allowing for internal self-government but external affairs were still controlled by Britain.

St Vincent’s Westminster style parliamentary democracy is represented by the House of Assembly of St Vincent and the Grenadines. The unicameral legislature has 21 members, fifteen of which are elected and six senators that are appointed by the Governor-General. The House of Assembly represents one of the smaller legislatures of the Commonwealth. As there is no local government, all parts of the islands are administered by central government, with elections held every five years.

Today, the UK and St Vincent enjoy a relationship based on common interests including trade - £19 million worth of trade in goods and services in 2020[3] - and adaptation to the challenges faced by climate change.[4]

A volcanic island, St Vincent is home to the active La Soufrière volcano. “The deadliest eruption occurred in 1902 when an estimated 1,600 people were killed and much of the island’s agriculture and sugar industry was wiped out. There was a significant eruption in 1979 with a large ash plume reaching as far as Barbados, however an advanced warning issued ahead of the eruption meant there were no casualties.

On 8 April 2021 a red alert was declared and 20,000 Vincentians were issued an evacuation order. The very next day an explosive eruption occurred, followed by subsequent eruptions. Around 20% of the island’s population were displaced, either moving into government shelters or the homes of family and friends in safer parts of the islands.

Beyond St Vincent, the impact of the eruption has also been felt elsewhere in the region, with ash plumes having reached as far as Barbados, Grenada and St Lucia. Experts continue to warn of the risk of further eruptions and although seismic activity is currently low, around 30 explosive events were registered since eruption on 9th April up until 22nd April. 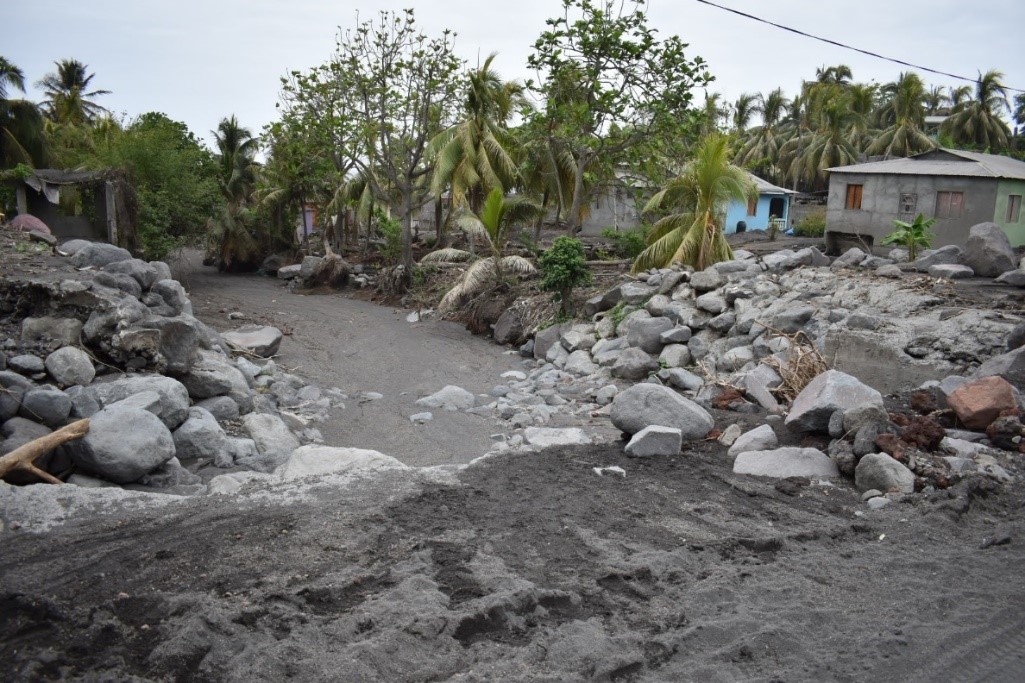 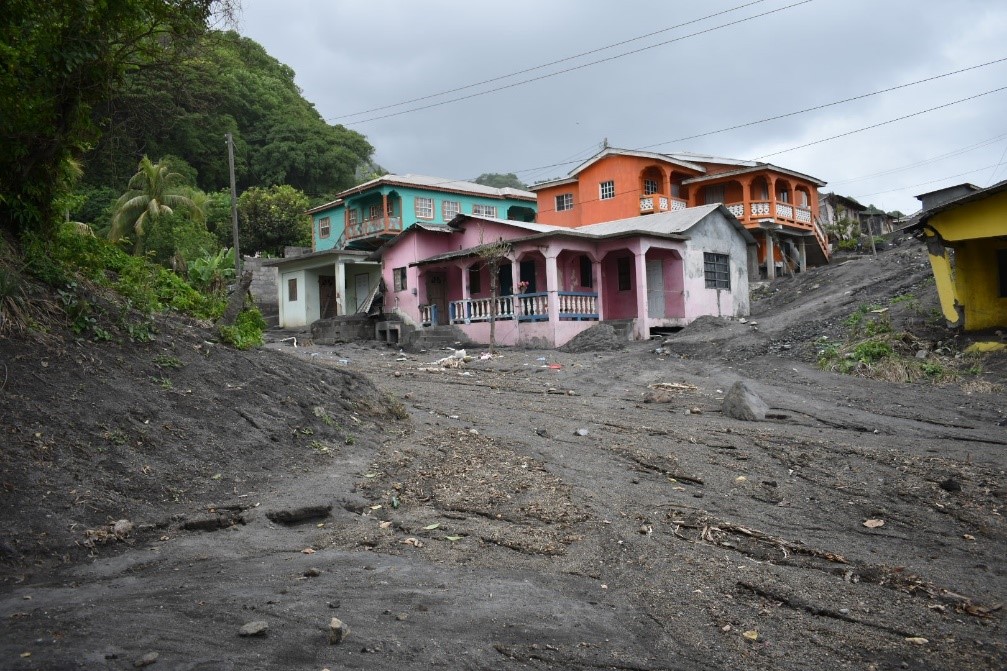 Although some parts of the red zones remain impassable, residents from the orange zone have been permitted to return to their homes to begin rebuilding. This has started with a clean-up of the thick layer of ash blanketing most of the island – estimated to cost around 38 million dollars (United Nations Environment Programme).

With assessments still ongoing, there has been significant damage to the agricultural sector, with large amounts of crops left damaged, as well as damage to critical national infrastructure and water supplies. Prior to the volcanic eruptions, the islands were also facing challenges relating to the COVID-19 pandemic. A village following volcanic eruptions and recent mudslides. Source: British High Commission, Kingstown.

In addition to the public health challenges, the global pandemic led to a sudden halt in tourists arriving. This caused a huge hit to the local economy and loss of livelihoods, with the tourism industry in St Vincent estimated to have directly employed over 7,000 people and an additional 20,000 indirectly, representing around 15% of total employment.[5] Building a more resilient economy continues to be a priority for the country, both in light of the pandemic but also to mitigate the impacts of climate change and natural disasters on a nation so dependent on its natural ocean environment for tourism.

Heavy rainfall has also since followed and caused multiple lahars, or mudslides, which local seismologists have noted to include steaming hot water, meaning they have passed through volcanic deposits. This adds further difficulty to what is already a hazardous clean-up mission for the island.

As the people of St Vincent and the Grenadines begin to return and rebuild following the disaster, they do so against the backdrop of the pandemic and its economic implications, all whilst entering hurricane season. Recovery from these environmental, economic and social impacts will be long-term, and international support to the islands will need to be similarly ongoing.

With recovery efforts now underway, CPA UK hosted a briefing for UK parliamentarians with the British High Commission to Barbados and Eastern Caribbean and the Caribbean Disaster and Emergency Management Agency (CDEMA), to discuss in detail the situation on the ground and the support needed moving forward.

UK members received an update on UK support to disaster relief through CDEMA, damage assessments on national infrastructure, as well as ongoing efforts to return displaced people from shelters back to the orange zone and parts of the red.

Alongside the economic and human impact of the disaster, the ecological impact was also raised during the discussion. As a small island, it will be crucial to ensure that support for resilience building to natural disasters and adaptation to climate change continues throughout St Vincent’s recovery.

CPA UK will continue to keep members of the UK Parliament linked with the Commonwealth, through briefings on current events and ensuring our legislatures remain connected as part of our knowledge-sharing programmes. CPA UK continues to send our solidarity to colleagues at the House of Assembly and the people of St Vincent and the Grenadines.

For up to date information on the situation in St Vincent & the Grenadines please follow FCDO and CDEMA.

[1] Government of Saint Vincent and the Grenadines, http://www.gov.vc/index.php/visitors/about-svg